Tanzania Agricultural Research Institute -Mikocheni (TARI-Mikocheni) is one of the 17 research centres under TARI. It was established in March 1996 as a measure to sustain and institutionalize coconut research and development activities conducted by the then National Coconut Development Programme (NCDP). The NCDP was established by the Government of the United Republic of Tanzania in the fiscal year 1979/80 with the aim of promoting coconut production and utilization in the country. The program covered the whole coastal belt of Tanzania and the Island of Zanzibar.

TARI-Mikocheni has two mandates, namely conduct and promote research for the development of the coconut sub-sector and promote research and utilization of agricultural biotechnology for socio-economic development in the country. The institute is one of the subcentres together with TARI Kibaha of which both are within the eastern under the TARI Mlingano Centre. The centre’s head office is in Dar es, salaam at Mikocheni B, Plot 22 along the Coca cola Road. It has two sub-stations, namely Chambezi and Mkuranga, where most of the research activities are conducted. The former is located about 55 km north of Dar es salaam near Bagamoyo town at latitude S6.520 and longitude E 38.910, while the latter sub-station is located at S 7.120 and longitude E 39.200, about 50 km south of Dar es salaam.

There are two departments: 1) Research and Innovation and, 2) Technology Transfer and Partnership. Under these departments there are seven subprograms: Biotechnology, Crop research, Natural resources, Post-harvest management, Socioeconomics and marketing research, Technology dissemination, commercialization and partnership, and Knowledge management and communication programs as shown below by TARI Mikocheni organisation structure; 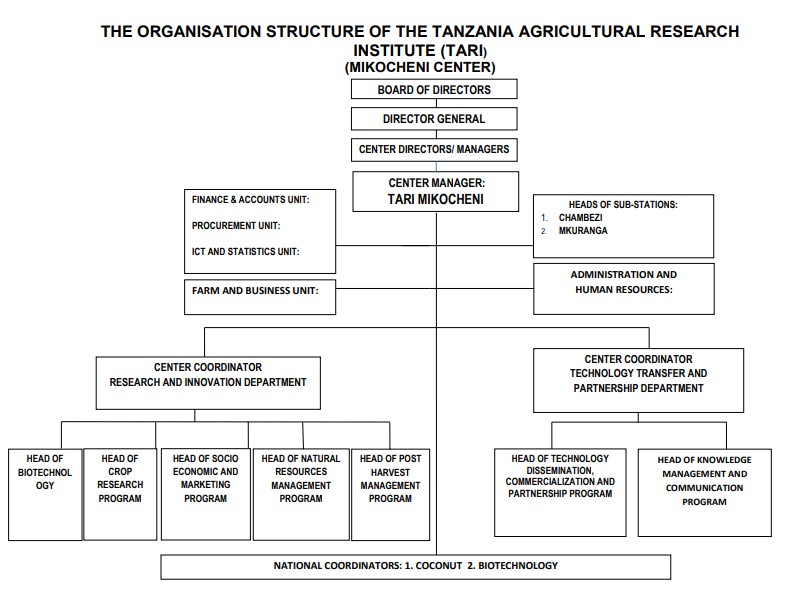 In addition, Since the establishment of the Mikocheni agricultural research center, it has been managed (Headed) by various leaders as outlined below; 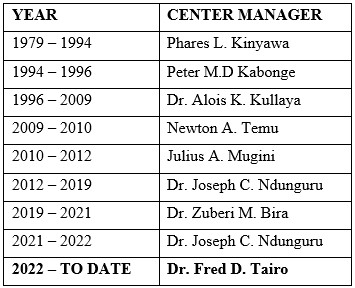