Pyrethrum, (Chrysanthemum cinerariaefolium L.) is a perennial herb, belonging to the family compositae. Pyrethrum is grown for the production of pyrethrins which are used to control many human and household pests such as mosquitoes and houseflies. Pyrethrum grows well from 1800 to 3000 metres above sea level (m.a.s.l). In Tanzania, regions growing pyrethrum are Mbeya (Mbeya rural), Songwe (Ileje), Njombe (Ludewa and Makete), Iringa (Mufindi and Kilolo), Arusha (Almeru), Manyara (Babati and Mbulu)

Different promising clones have been developed in the course of research work which has helped to improve pyrethrum production for yield and pyrethrin content in the farming community. Clones with both high yields and pyrethrin content were developed and disseminated as recommended cultivars for altitude from 1800m to 2600m a.s.l.

Table 1.0 : Clones/crosses developed since 1963 and beyond

The use of pyrethrum marc or grist in the farmers fields for pest control in maize and horticultural crops, maize in store were also studied for research and development (R &D). However, further research in this area is required. 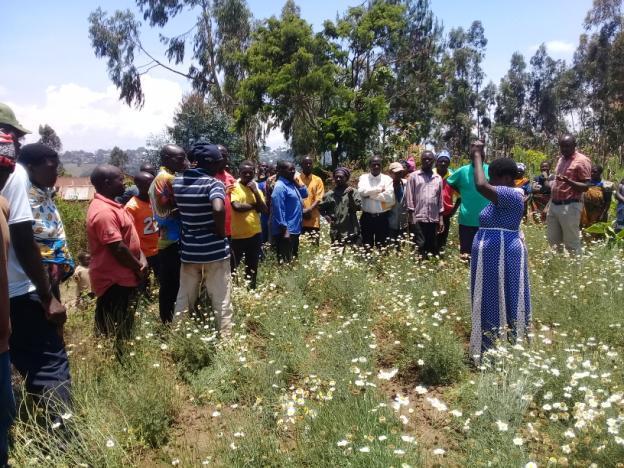 All the above projects are conducted in collaboration between TARI-Uyole and Pyrethrum Company of Tanzania (PCT). The overall main objective for all trials is to come up with recommended and released varieties better than the present materials with high pyrethrum dry flower yields greater than 1200kgDm/ha/year and pyrethrin content greater than 2.0 %.